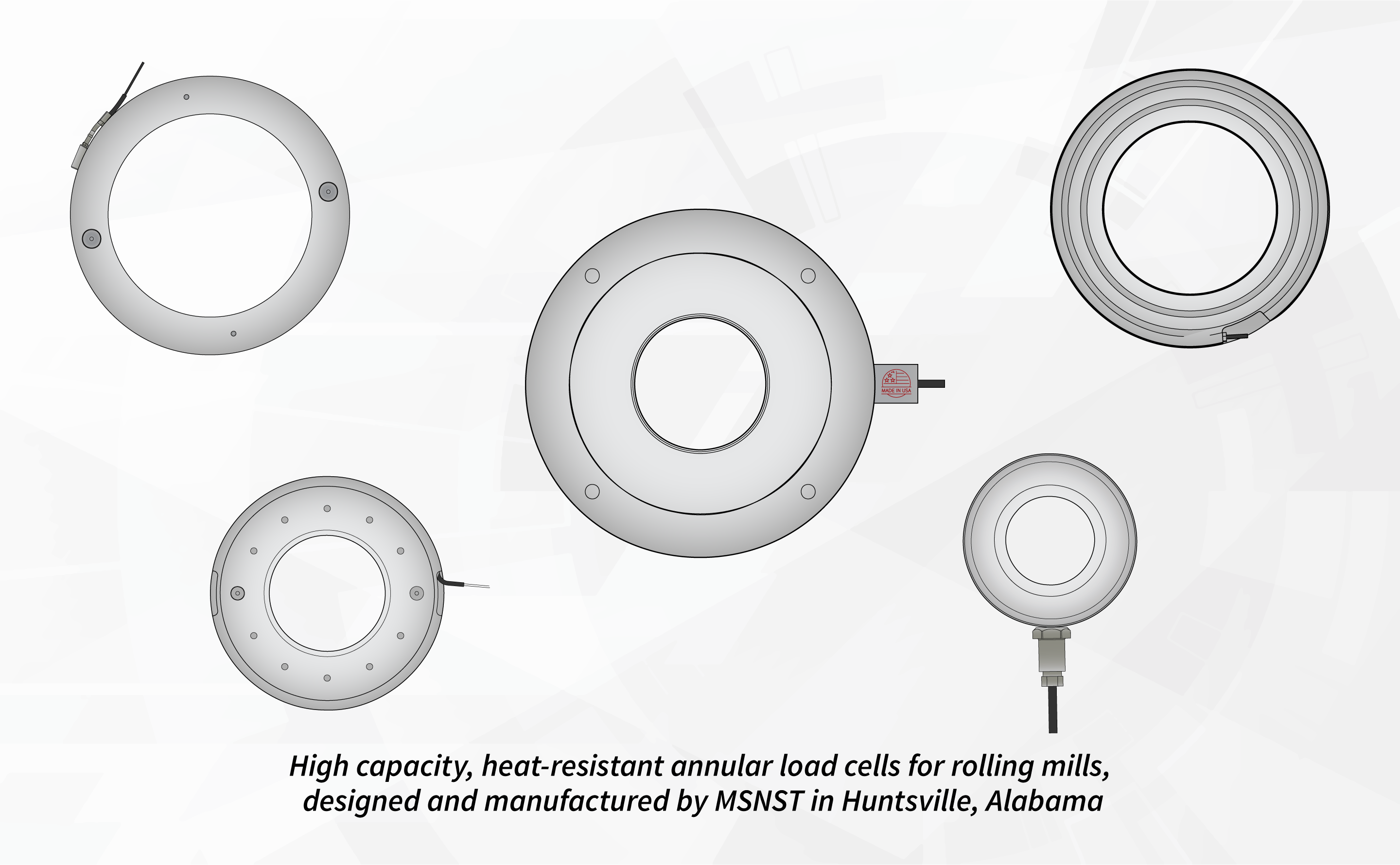 Numerous steel manufacturers wish to monitor and control the rolls’ forces during production. This allows them to maximize efficiency and product quality, while minimizing risks to valuable rolls equipment.

Multiple work-around approaches have been implemented, such as fitting the frame of the rolls’ equipment with an extensometer or similar, the most reliable and accurate force readings come from a load cell directly carrying the load. These usually come in the form of a giant “load washer” or “ring cell”, consisting of a steel ring between 18” and 36” outer diameter, with a section thickness and overall height of several inches. The ring cell is fitted onto the lead-screws of the rolls frame, and a captive nut prevents any axial motion of the ring cell while operating the rolling mill.

While this is a proven arrangement that provides good readings, some of the inherent design features of the rolls arrangement makes it challenging to follow typical “best practice” approaches to load cell design. This manifests itself in decreased accuracy and response. Ultimately it comes down to precisely funneling compressive stress into the load cell’s sensing area in a consistent way – which is difficult to achieve given the broad loading surface mandated by the massive forces at play (often well in excess of 2,000,000 LBS). This can be mitigated to some extent by very tightly controlling the surface finish and overall flatness of the load cell and adding conformal shim plates, but even still, typical error is often 1–2%.

A secondary issue is proper sealing of the load cell, which must reliably operate in a harsh, oily environment. In most cases, significant downtime and effort is required to remove and install the load cell – which makes it particularly important to minimize risk of moisture intrusion that will cause premature failure of the load cell.

After decades of building and repairing traditionally engineered rolling mill load cells, MSNST developed a new design addressing the shortcomings they’d seen with other approaches. Totally interchangeable with existing designs, MSNST rolling mill load cells measure shear- strain, rather than the typical compressive-strain, which provides more signal output without increasing the overall amount of stress in the load cell element and actually decreasing the overall amount of compliance and deflection of the load cell itself.